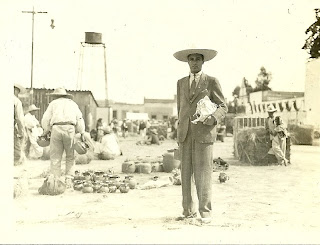 Which brought a rush of memories and sent me back to the pages of Alvin’s memoir, A Walk Toward Oregon. I first heard the story the second year of Summer Fishtrap, when Alvin was on a panel with Herb Mitgang of the New York Times and Jonathan Nicholas, then at the Oregonian. The panel was about fact and fiction, and, after listening to the two journalists talk, Alvin rose to recall the long ago trip to Mexico.

“When I interviewed Trotsky in Mexico in 1937,” he began, and we in the audience looked at him and each other with small gasps and big smiles. Here we were in a meeting room at a Methodist church camp at Wallowa Lake, Oregon in 1989, being thrust back to major events in Twentieth Century history—to the Russian Revolution, the Spanish Civil War, and a man who was a prime player in the first and a sideline jockey maybe looking for a role in the second.

His interviewer, Alvin Josephy, was a 22 year old Harvard dropout with a stint as a junior screenwriter in Hollywood and a few months coordinating high school essays and WOR radio interviews with newspaper employees for the New York Herald Tribune. At the end of the school year, Alvin had talked his way into a Herald Tribune press card and arranged a trip to Mexico with the intention of interviewing the new President of the country, Caesar Cardenas, and Trotsky. Using political skills he’d picked up in student politics with a national bent at Harvard, and writing skills he’d begun honing as a high school student at Horace Mann, Josephy scheduled an interview—sending several written questions ahead—with Trotsky and began making the connections that would allow him to meet the new President. 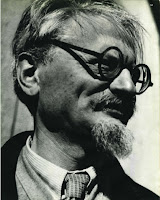 Josephy wanted to know whether Trotsky would support a “liberal front” alongside Stalin in Spain, what Trotsky thought of the eventual outcome of events there and in Germany and Italy, where Hitler and Mussolini were on the rise, and whether he was engaged still—or his partisans were engaged still—in battle with Stalin. He came away thinking that Trotsky was “muddled” in his thinking, but that he was also sincere, and saw himself as the true practitioner of Marxism waiting for the proletariat to rise and throw out all despots and capitalist masters.

Ken Magazine later printed Trotsky’s contentious reply to Josephy—he had not included all of his (Trotsky’s) written answers to questions, and he incorrectly asserted that there was a rift between Trotsky and his host, the great muralist Diego Rivera—and noted that they had already heard from the “communists,” who thought the article was biased toward Trotsky. “Ken gets it both ways,” they announced alongside Trotsky’s reply.

A train trip with one of Cardenas’ cabinet members and a brief interview with the President followed. In his memoir, Alvin remarks that he was unable to get an interview with dissident General Cedillo, who had resigned and retreated, and was reportedly conspiring with American oil interests to overthrow the populist and anti-clerical Cardenas. The great novelist Graham Greene, ascribing his success to his Catholicism, managed the interview with Cedillo a few months later—before Cedillo was assassinated.

The mind boggling thing about all of this is that Alvin was 22 years old, and smack in the middle of his century’s history! The portents of things to come are the incredible amount of research and preparation he did before the trip—about the Russian Revolution, current events in Europe and the U.S., and the history and culture of Mexico, his firm belief in democracy, and his interest in fair play and justice for all citizens, and especially for the indigenous peoples who had been swept aside by European conquerors.

and, check out Barbara Kingsolver’s new book, Lacuna, a historical novel which follows events in Mexico City in the Rivera-Kahlo household in the time of Trotsky!