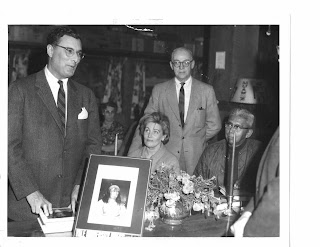 Being a direct participant in World War II was a choice for Alvin Josephy—but not much of one. Born in 1915, he came of age in the depths of the Depression as fascist regimes were gaining power in Europe. He’d been involved with student groups and national politics—meetings and debates on Huey Long, socialism, communism, and the New Deal—while at Harvard, traveled to Mexico to interview Trotsky and President Cardenas in 1937, and was working as news director at WOR Radio in New York on the eve of Pearl Harbor.

Soon after Pearl Harbor Alvin headed to Washington D.C. and Archibald MacLeish’s Office of Facts and Figures—the government propaganda arm. It wasn’t close enough, and connections, contacts, and events soon had him at Perris Island Boot Camp, and then a Marine Corps combat correspondent in the Guadalcanal mop-up, and at the landings and occupations of Guam and Iwo Jima.

He waded ashore at Guam, talking into a condom-covered microphone tethered by 40 feet of wire to a recording machine buried in a landing craft. Most of the men he walked ashore with were hit before they made the beach, but securing the Island and taking Japanese prisoners was every bit as dangerous and as important in Alvin Josephy’s growth as a man and writer. On Iwo he hopped from unit to unit, place to place, often traveling by ambulance—he said ambulance drivers knew the current score on the ground better than anyone else.

Alvin and a few others were called back to the States from Iwo to explain to the American public why over 4,000 Marines gave their lives to take an 8 square mile island a million miles from home. The answer was B-29s. In the first 100 days after the Iwo airfields were opened, 851 planes, coming back crippled from air strikes on Tokyo, unable to make it back to their take-off points in the Marianas, landed safely on that 8 square mile island.

Then came the Atom Bomb—and Alvin did not have to return to battle in the Pacific and the anticipated invasion of Japan. A trunk arrived from Guam with carbon copies of the dispatches he’d sent to ships to send to home town papers across the land—interviews in fox holes, stories of courage, camaraderie, and thoughts of home. He took a month of leave, went to North Carolina, and wrote his first book, The Long and the Short and the Tall.

It was published in 1946, when he was 31 years old. I’d never read it while he was alive, though I’d heard some of the stories as we traveled the Northwest to readings and signings with his memoir, A Walk Toward Oregon. And watched and listened as old Marines came to have books signed and talk about Guam and Bougainville, Tarawa and Iwo Jima.

Some of them cried, as I cried last week, 65 years after the events and the writing about the events, cried at the horror, heroism, dumb luck and tragedy of a war so huge and so different as to make it almost inconceivable now. Today’s wars are their own kind of horror, heroism, dumb luck, and tragedy, but the concept of 800 ships and thousands of men attacking 30,000 enemy soldiers on a tiny island with bombs, shells, and bayonets is a hard one to get around today. But it made the “survivor’s guilt” that Alvin sometimes talked about and that the vets who came to our readings talked about palpable.

And I think I found an understanding of something else that he brought back from that War. On Guam they had launched an effort to take Japanese prisoners, and although most of the defeated Japanese committed suicide or fought to their deaths, some did surrender, and Alvin found hope in that. He thought, as he lay in a ship’s hold with a handful of prisoners and fellow Marines after an evening of conversation, that maybe minds could be changed, that Japanese soldiers who thought suicide more honorable than surrender could learn “bigger ideas,” and that the world might embrace” freedom and democracy and justice and truth.”

He spent the next 60 years chasing and embracing those ideas.

p.s., used copies of The Long and the Short and the Tall can be had for five dollars and up. “New” copies—I would guess that means mint condition copies—of the 2000 paperback edition from Buford Books, with a new foreword by the author, are $100 and up!