I was digging through the small—and often most interesting—pieces of literature that Alvin collected along the way to his books and work as an advocate for Indians and the earth. Among the conference reports, ethnographic studies, newspaper clippings, and student papers was an article from Westways magazine, September 1977 by M. Woodbridge Williams, “Legacy of Survival.” The piece recounts a 1970 meeting with Josiah Red Wolf, at that time the lone survivor of the Nez Perce War. (When began his research in the early 50s, there were three: Red Wolf, Albert Moore, and Sam Tilden.)
Angus Wilson, one-time tribal chair and a good friend of ’s, accompanied . Josiah was 98 at the time, but he and Wilson soon had an animated conversation going in Nez Perce— had to get him off an agitated rant on the treaties.
Red Wolf had been just five years old during the War, had spent a year at and five in . He may have been among the first 29—all widows and orphans—to return to Lapwai, under the care of James Rubin.
From Lapwai he went to the in , and from there, in 1890, to the Carlisle Institute for Indians in . At he learned the cobbler’s trade, and he learned to play the saxophone and cornet. In fact—no small irony here—he marched with the Carlisle school band in a Columbus Day parade in .
Red Wolf eventually came back west,”became a cobbler for the North Idaho Indian Agency and also directed a prize winning band.” He married in 1896, farmed in the Stites area, and played in an orchestra for Saturday night dances. 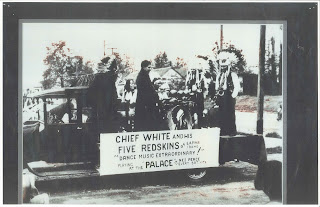 All this music sent me in two directions. First, I have talked at length over the years with Anne Richardson and her husband, Dennis Nyback, about early jazz and blues singers. Dennis has written about a woman named Lee Morse, who grew up in , and who he thinks is the first recorded woman jazz singer. Morse went to and Broadway in 1923. Richardson and Nyback want to know where and how she started singing jazz in Kooskia in the early 1920s. Player pianos? Maybe?
And Indian dance bands. I happen to have a picture of “Chief White and his Five Redskins” from on the wall here at Fishtrap. I don’t remember how it got here, but the band is on a flatbed truck, circa 1920. I have heard other stories of Indian dance bands in the early part of the twentieth century. (Beth Piatote, who was our Fishtrap writer in residence a dozen years ago or more, is enrolled at Colville where her Nez Perce grandfather or great-grandfather left the reservation to play music in 1919!)
Could it all have started at Carlisle, with Indians from across the country pulled and pushed to Pennsylvania, taught to be seamstresses and cobblers, but allowed music and then returned—some of them; many never made it back to their home reservations—to put together dance bands which played the hippest white music their white neighbors—who had not been to New York or Pennsylvania themselves—had ever heard? Chief White looks to be a novelty act from the picture, but if the band played “every Saturday night” they had to be good musicians. I wonder how many of these Indian bands there were across the country.
And whether the Nez Perce and gave Lee Morse, the “first female jazz singer,” back to ! Nyback is still doing his research.
###