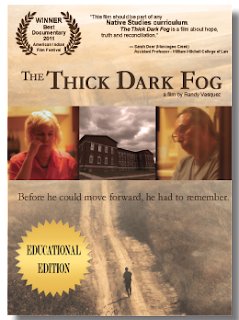 I am still haunted by the “Thick Dark Fog” that Walter Littlemoon described in the video I saw on Public Television last week. Walter was born the same year that I was, 1942, in Wounded Knee, South Dakota on the Pine Ridge Indian Reservation. I was born in Fosston, Minnesota, just 600 miles east and north of Wounded Knee. Walter was taken from his parents and shipped to an Indian boarding school when he was five.  I didn’t go to school when I was five, because Fosston didn’t have a kindergarten. And there weren’t any Indians in our school when I did go, although the White Earth Reservation was fewer than ten miles away from Fosston. I have vague recollections of asking where the Indians went to school as we traveled through the rez to get to my Uncle Al’s resort—a few cabins and boats on Island Lake, which must have been on the rez or surrounded by it.
The resort was a couple of two track miles off the county road that went on to Mahnoman and the center of the rez I guess. I remember that you had to back up to a passing spot when you met a car. And I remember an Indian boy showing me how to thread a minnow on a hook. I don’t remember learning where the Indians went to school. I don’t remember any other instance of meeting or talking with Indians in the ten years we lived in Fosston, or on any of the visits back we made after we moved to California in 1952.
Wait, there were the times we went to Itasca State Park, headwaters of the Mississippi, and my uncles ran ahead to put pennies and nickels on tree branches—they had told me that there were money trees at Itasca—and I would shake the trees and fill my pockets with money. And for a quarter’s worth of pennies and nickels I could get my picture taken with a real Indian Chief. That’s the other Indian I remember from Minnesota.
And now I am pushing memory. When I was nine, the summer before we moved to California, I played on some kind of pre-Little League baseball team that went to the Red Lake Reservation for a game. I was the youngest kid on the team, a tagalong who got to play some right field. And mostly now I remember that in California when Little League came to town I bragged that I had played real baseball with 90 foot bases and leading off. I don’t remember anything about the kids we played against at Red Lake except that they were Indians.
How many of us have Indian stories in our pasts that have been brushed aside by educational and social systems that saw them as vanishing or already vanished? How many of us my age and close knew that Indian kids our own age were being literally kidnapped by authorities in a strange and ultimately brutal attempt at assimilation?
Here’s a link to five minutes of Walter’s story on Youtube: http://www.youtube.com/watch?v=5uxtVtBhceY