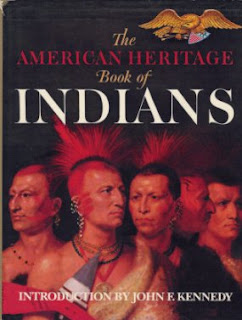 Alvin Josephy knew the people who had taken over American Heritage Magazinein 1954 and turned it into a profitable hard cover edition of well written and researched articles on American history. He wrote several articles for them, including the piece on “Chief Joseph and the Nez Perce War,” and in 1960 was convinced to take on the job of editing The American Heritage Book of Indians in their book division.,
The text was largely written by William Brandon. Among other things, Alvin scoured the country for images—photos of Indians and artifacts, and original drawings—to accompany the text. In A Walk Toward Oregon, he tells the story of finding original drawings by Fernandez de Oviedo, “the first-known views of Indians in large canoes and as slaves in Caribbean gold mines.” They were stowed away in the Huntington Library in California, and reproduced broadly after their American Heritage publication. (Alvin and early illustrators is yet another topic!)
At any rate, the book was published in 1961, in the first year of John F. Kennedy’s presidency. It was a turning point for Alvin, as he elected to stay on full time at Heritage, where he would work for almost 20 years. And the new president—at whose urging I am not sure—wrote the introduction to his first book on the new job. On this as on so many matters, one wonders how events might have turned differently but for the Texas tragedy. His 1961 words are as fresh and true today as they were 52 years ago:
For a subject worked and reworked so often in novels, motion pictures, and television, American Indians remain probably the least understood and most misunderstood Americans of us all.
American Indians defy any single description.  They were and are far too individualistic.  They shared no common language and few common customs.  But collectively their history is our history and should be part of our shared and remembered heritage.  Yet even their heroes are largely unknown to other Americans, particularly in the eastern states, except perhaps for such figures as Chief Joseph and his Nez Perce warriors of the 1870’s, Osceola and his magnificent, betrayed Seminoles of the 1830’s, and possibly Sacagawea, the Shoshoni “bird woman” who guided the lost Lewis and Clark expedition through the mountain passes on Montana.
When we forget great contributors to our American history-when we neglect the heroic past of the American Indian-we thereby weaken our own heritage.  We need to remember the contributions our forefathers found here and from which they borrowed liberally.
When the Indians controlled the balance of power, the settlers from Europe were forced to consider their views, and to deal with them by treaties and to her instruments.  The pioneers found that Indians in the Southeast had developed a high civilization with safeguards for ensuring the peace.  A northern extension of that civilization, the League of the Iroquois, inspired Benjamin Franklin to copy it in planning the federation of States.
But when the American Indians lost their power, they were placed on reservations, frequently lands which were strange to them, and the rest of the nation turned its attention to other matters.
Our treatment of Indians during that period still affects the national conscience.  We have been hampered-by the history of our relationship with the Indians-in our efforts to develop a fair national policy governing present and future treatment of Indians under their special relationship with the Federal government.
Before we can set out on the road to success, we have to know where we are going, and before we can know that we must determine where we have been in the past.  Is seems a basic requirement to study the history of our Indian people America has much to learn about the heritage of our American Indians.  Only through this study can we as a nation do what must be done if our treatment of the American Indian is not to be marked down for all time as a national disgrace.
# # #