A couple of weeks ago I wrote about the photographer John Fouch and his pictures of Plains Indians and Chief Joseph and other Nez Perces at Fort Keogh in Montana in the late 1870s—and I promised more. Today’s news from the Senate—the 61-30 vote for cloture on the “Employment Nondiscrimination Act,” also known as ENDA—seems like the right occasion to consider another Fouch image. 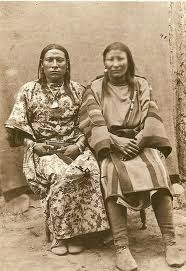 ENDA would make it illegal to discriminate against someone on the basis of sexual orientation or gender identity. Fouch’s relevant photo is of “Squaw Jim” and a companion—maybe his wife. They are Crow Indians and the time is the late 1870s.
The literature refers to cross gender Indian people as “Berdache,” a French word derived from a Persian word referring to male-male attraction. This from the “Encyclopedia of the Great Plains”:
“In the seventeenth and eighteenth centuries, French explorers, traders, and missionaries in the Mississippi Valley occasionally encountered Native Americans who could be classified neither as men nor women. They called such individuals berdaches…. In fact, Plains Indian berdaches are best described as occupying an alternative or third gender role, in which traits of men and women are combined with those unique to berdache status. Male berdaches did women’s work, cross-dressed or combined male and female clothing, and formed relationships with non-berdache men.
“Plains Indian women often engaged in hunting and warfare, but a female role equivalent to that of male berdaches, although common west of the Rockies, has been documented in the Plains only among the Cheyennes (the hetaneman). Even so, some Plains Indian women became notable warriors and leaders and behaved much like berdaches. In the early nineteenth century, Running Eagle of the Piegans wore male clothing on war parties, while Woman Chief of the Crows had four wives.”

The entire interesting entry is at http://plainshumanities.unl.edu/encyclopedia/doc/egp.gen.004

In other places Indians are referred to as “two-spirited,” and in fact contemporary Indians promoting respect and equality for gay, lesbian, and trans-gender tribal members now prefer “two spirit” to Berdache, which is culturally loaded.

The loading was done by Christian missionaries, who could not accept Indians that challenged their ideas of gender boundaries, and were in fact often accorded respect for special access to spiritual worlds provided by their dual-gender, dual-spirit personas. Walter Williams, who has written extensively on the subject, explained things this way in The Guardian:

Rather than emphasizing the homosexuality of these persons, however, many Native Americans focused on their spiritual gifts. American Indian traditionalists, even today, tend to see a person’s basic character as a reflection of their spirit. Since everything that exists is thought to come from the spirit world, androgynous or transgender persons are seen as doubly blessed, having both the spirit of a man and the spirit of a woman. Thus, they are honoured for having two spirits, and are seen as more spiritually gifted than the typical masculine male or feminine female.
I expect that many tribes and tribal members have gone on with old beliefs and practices, and two-spirited Indians have continued to enjoy respect and “normalcy” in many if not most cases in the years from Fouch and his 1870s photos until now. And I think it is interesting that the mainstream American public and our politicians, who sometimes lead but most often struggle to follow their vocal supporters, and who just a few years ago were busy promulgating a “Defense of Marriage Act,” and considered the “Don’t Ask Don’t Tell” policy “liberalizing” to our military, are coming to the conclusion that “two spirited” people should be treated equally in the workplace.
# # #