It is the end of November in my 72nd year and my mind churns.
I guess for many of us of a certain age November will always be associated with John Kennedy’s death. Yes, I remember the day, remember riding my bike to class at UC Riverside, putting it in a rack and walking across campus and coming on a distraught Dr. Dennis Strong, waving his hands, tears streaming down his face, shouting that they had shot the President.
Although a couple of UCR students I knew checked out almost immediately and joined the Peace Corps, it took me almost two years to do the same. We went to Turkey with Kennedy half-dollars stuffed in our bags, tokens we would hand out to friends we made. And, like Volunteers across the world, I found newspaper and magazine pictures of JFK, in my country alongside photos of Ataturk, in small villages across the land.
This November, teaching a class on ecosystems and tribes in nearby La Grande to Oregon State University ag and natural resource students, trying to get them to relook at what was here before our European ancestors arrived, I told them that new world potatoes probably saved my Norwegian ancestors from starvation and that Indians, people of the salmon who lived and worked what we now call the Pacific Northwest, were here with sophisticated societies and economies long before trappers, missionaries, explorers, and settlers came to change and replace them. I reminded them that historical perspectives change slowly, and that they had probably participated in the same fourth grade Thanksgiving pageants that I had watched and played in 60 years ago, that no one had encouraged us then to wonder where the corn and squash and beans that the Indians shared came from—and for that matter, how Squanto had learned enough English to tutor them in agriculture. Our history—and our stereotypes of hunter-gatherer Indians—have been handed to us flawed.
But there is change. A few days ago a group of Joseph fifth and sixth graders came to the Josephy Center to see the Indian art exhibit and the library. We talked about the Nez Perce and how they got their name. I told them about Indians from the coast, the far north and the inland high desert congregating at Celilo to fish and trade goods and stories. I said that when they got the horse, the Nez Perce had gone over the mountains to hunt buffalo. “Where did the Indians get horses?” I asked, and a bright-eyed fifth grader, hand bouncing in the air, said “I know, I know—the Columbian Exchange.” 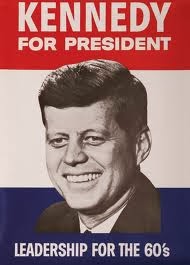 I try to tell my grandchildren, who are in 7thand 9th grades, about Kennedy and how he tried to change the world—and in some ways did so—and how he changed my life. We have a campaign poster that I have hauled with me from 1960, my freshman year of college at Denver University, that promises “Leadership for the Sixties.” Their eyes glaze. I take them to the community Thanksgiving feed to help serve. As they feared, it’s mostly old people. They’re miffed—but they buck up and do a good job of it.
Kennedy didn’t get many years—and watching it all again it seems that he knew that the work was big and his time was short. He wrote the foreword to the American Heritage Book of Indians (which Alvin Josephy edited; JFK on Indians for previous post) and showed an understanding of that history—we can wonder how Indian policy might have changed.

I am brought to his book, Profiles in Courage, and Alvin’s book, The Patriot Chiefs. Both men believed in the importance of individuals in their times. Alvin was a historian with an urge toward action; JFK an actor with a sense of history. My mind goes from Kennedy to Tecumseh, one of Alvin’s Patriot Chiefs, an Indian leader who dreamed a pan-Indian stand against the European invasion. He failed, but is with us still in the genes of Indians still fighting for sovereignty, still struggling for a place in their native land.
Dreams stay with us; Tecumseh and Kennedy are with us.