Yesterday in line at the grocery store, a new young clerk was telling someone how interested he was in the Civil War, and how he really wanted to go east and visit Antietam.  I piped up to suggest that he think about the civil war in the west. Had he ever wondered how Union County got its name, and why there is a Sumter close by? And did he know about the impact of the Civil War on Indian tribes, and specifically on the Nez Perce treaties? 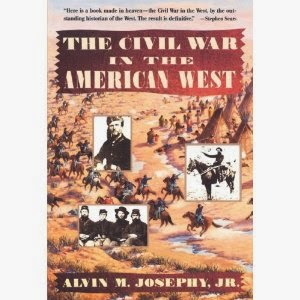 I’m teaching a short, non-credit class on the Nez Perce and the Wallowas, and plan to devote one of five sessions to the treaties. Thinking about the grocery store clerk and about the upcoming class, it occurred to me that Alvin Josephy’s treatment of the treaties—in his books and in a long article for American Heritage on the 1855 Treaty—might have been different had he done the Civil War in the West book first.
Briefly, here’s the chronology: 1855 is the Stevens treaty talks in Walla Walla. As a lawyer friend points out, the Nez Perce negotiated a pretty good treaty. They were the only ones to get their own reservation—the initial Stevens goal was to put them together with others on a confederated reservation. And they ceded very small amounts of their traditional village and migratory grounds.
Then, in 1861, gold was discovered on the Nez Perce Reservation. In 1862, directly contravening the provisions of the treaty, 18,000 white miners flooded the reservation. Remember, the Civil War is underway. There is no way that the federal government can remove 18,000 miners from the reservation. And the Union wants the gold!
I remember as a child that Civil War currency—like Weimar marks—was available for cereal box tops (well, I don’t remember any specific box top offers, but it seemed that there were; kids had Confederate dollars). Lincoln and the Union wanted the trails West open for many reasons, but one of them was to retrieve the gold which made Union currency hard currency. Currency that could buy arms and goods from other countries. What would have happened had the Confederacy controlled roads west? Why was the first road West the trail in the Southwest? Prior to the Civil War, none of the central or northern routes for rails or trails was agreeable to Southern Senators (including the Northern rail route surveyed by Stevens).
So the series of Indian treaties and broken treaties, the Minnesota uprising and the Mankato hangings, the Sand Creek and Bear River massacres, all owed to keeping Western trails open and retrieving Western gold. Yes, there were other factors, including fights over votes leading up to the War, recruitment of volunteers, etc. But, as Alvin points out in Civil War in the American West, the decimation of Indian tribes that goes on during the War and that continues after the War is all intricately tied to the great War that most Americans associate with Antietam and Gettysburg.
At War’s end, with the Nez Perce situation still unsettled and President Grant trying to deal with the “Indian problem” with his 1868 Peace Policy—giving reservation administration to the churches, with military commanders having their own solutions to the Indian problem, with Custer and Black Hills gold strikes and a War-time legacy of making and breaking treaties, everything that happens to the Nez Perce is in the shadow of that War.
Which all makes me wonder whether Alvin would have written those treaty chapters differently had he pulled all of the Civil War in the West material together first. It is one of many questions I failed to ask him when he was with us.
# # #