So last week I gave a little talk at the Hells Canyon Preservation Council’s Portland fundraising event on the Nez Perce in the Wallowa Country. Board Chair Pete Sandrock told me I had 30 minutes—and that he was a tough timekeeper!

There is no way to summarize the Nez Perce story in a half hour, so the job was to pick out some high points and connect them well enough so that newcomers to the subject would get something to whet appetites, and people with some knowledge of the business might get something new.
On the way home I kept thinking of high points I’d missed—and determined to send a message out apologizing and righting my wrongs. Alas, a week has gone by, and many of the “urgent” corrections have faded, but there are still a couple….
Number one, I meant to mention how important I think Alvin Josephy’s wartime experience as a journalist in the Pacific was to how he met and handled the Nez Perce story. He was only a few years away from horrendous experiences on Guam and Iwo Jima when Time Magazine sent him to Idaho and he first learned about the Nez Perce. He knew about war first hand, and he knew to trust the warriors’ accounts of things (and not rely on the generals and politicians). Previous, pre-war experience in radio journalism had honed his ear. As Indian historian Ciff Trafzer says, Alvin Josephy knew how to listen.
So two things came together immediately for Alvin. First, he saw that the Nez Perce Story was a “great American Epic,” a noble people and a fighting and tactically brilliant retreat and near escape to Canada and an alliance with the legendary Sitting Bull. Second, most of the available material on the tribe and on the War was from the White man’s point of view. But there were Indians’ accounts out there in the records of a courageous and eccentric Indian friend named Lucullus McWhorter, who walked the fighting retreat trail with Indian participants and wrote down their accounts; and in family memories and the words of four veterans of the War still alive.
Alvin of course determined to tell the bigger story of the Northwest and the Nez Perce, which took him back to Hudson’s Bay Company records, to the reservation at Colville where many descendants of the non-treaty Nez Perce still lived in exile, and to original accounts scribbled by fur traders, sketched at the Walla Walla treaty council by Gustav Sohon; notes, letters, and maps hidden and obscured in libraries and state historical societies across the country. 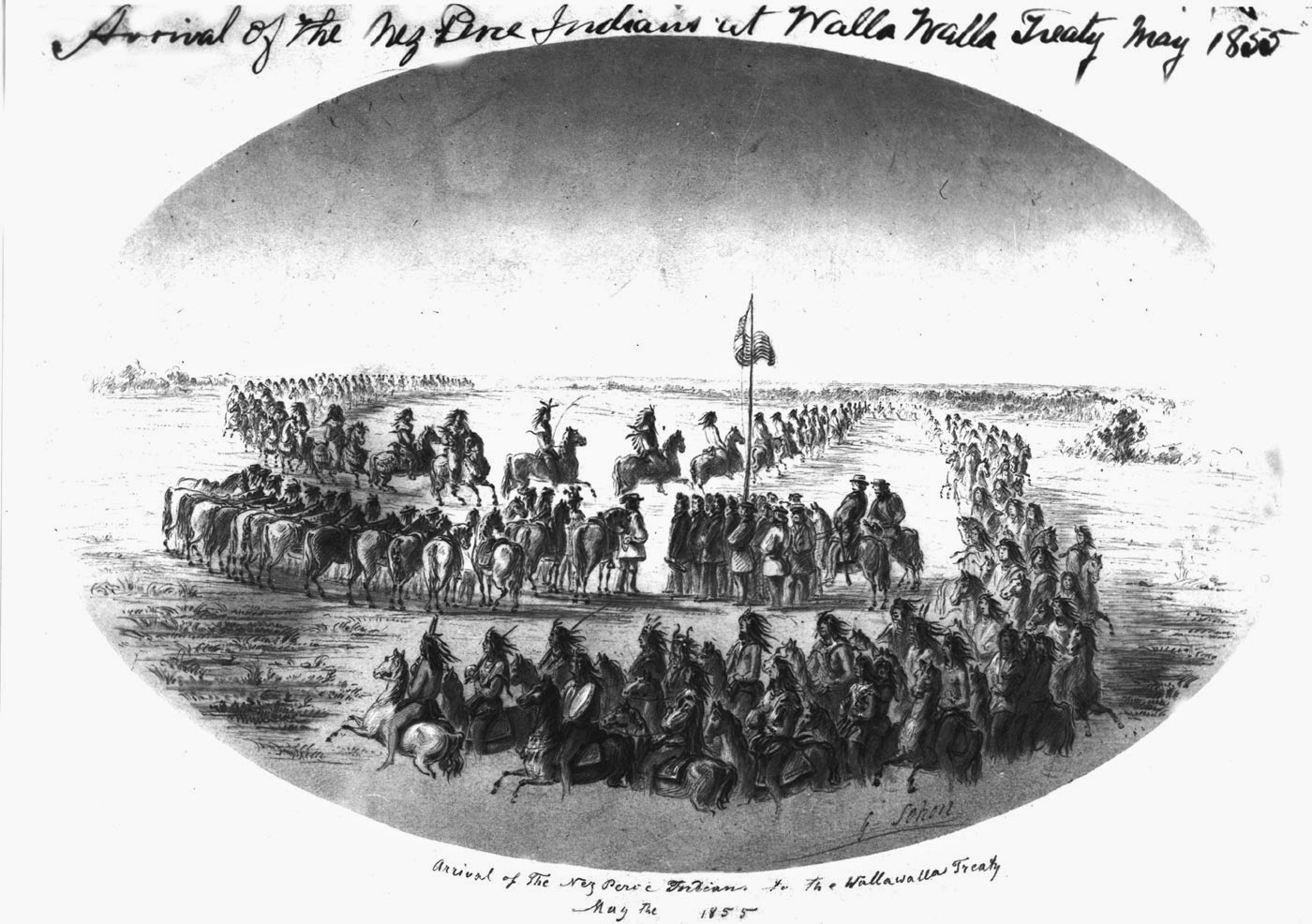 I think Alvin Josephy’s experiences in World War II are a big part of what he saw and how he proceeded with the Nez Perce story.
Number two. I know that I touched briefly on the discovery of gold on the Nez Perce Reservation in 1861, and the subsequent flood of white miners—some 18,000 had crowded onto the rez by 1862. I talked about the importance of the concurrent Civil War—Lincoln needed the gold and the country was still pressing irrevocably West during the great conflict. What I skimmed over was the War’s aftermath, when President Grant, listening to some of the liberal critics of how Indians had been treated during the War, turned over the administration of Indian reservations to the churches (in what Josephy says was the biggest abrogation of the line between church and state in our history). The Nez Perce Reservation was given to the Presbyterians to administer as part of Grant’s “Peace Policy.” (The Presbyterians become important in later Nez Perce history as well, but that is for another day.)
Fortunately, Presbyterian Agent Montieth was sympathetic and worked on the Indians’ behalf. President Grant eventually, in 1873, signed an executive order designating roughly half of the Wallowa country to the “roaming Nez Perce.” Assessments were made to make ready for buying out the white settlers’ improvements, but by 1875 there were too many settlers, there was too much in the balance, and Grant rescinded the 1873 offer.
What I am sure that I failed to mention is that one of the screwy bits of history, and certainly a killer of any serious effort to give Wallowa land to Indians, is that Grant’s reservation gave the Indians the half of the Wallowa Country that had been settled by whites—roughly the north half of current Wallowa County, including the lower valley and town of Wallowa! The whites would get land that they largely had not settled.
Historian Grace Bartlett examined this closely, and determined that it was most likely “bureaucratic error,” mix-ups in communication between the field and the head office.
History has turned on less.
# # #