The pictures and stories of refugees in Turkey, Jordan, Greece, Hungary, Croatia, Austria, Germany and more bring a brilliant image of mass migration into sharp and heart tugging focus. At first look and sound it seems like something new, and the proximate causes—wars and uprisings in Syria, Iraq, Afghanistan, Sudan, and Libya, and the accompanying refugee crisis in Europe fill and refill the media and our brain space daily. 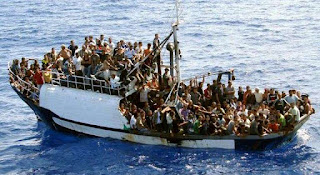 But migrations, invasions, expulsions, and other mass movements of humankind go back to the Israelites; to Persian, Alexandrian, Mongol, Hun, and Ottoman invasions; to the Inquisition and expulsion of Jews from Europe, to the Holocaust. In my short lifetime Jews fleeing Germany were denied entry into our country, and Jews, with Western guilt and support, made a new country and displaced Arabs; in my lifetime African peoples liberated from colonial oppression have risen up, killed, and chased each other from one place to another; and wars in Vietnam, Laos, and Cambodia have seen millions die and millions more scurry for new places to live.
These days I study American Indians, inheritors of a millennia-long migration—driven by weather, climate, oppression and opportunity—that began in Africa, crossed Asia, and put ancestors on these continents 20,000 or 30,000 years ago. Historian Alvin Josephy started the Indian Heritage of America, his book about what might have and must have happened before European arrival in the Americas, with languages. Those language maps tell stories of movements of Indian peoples before written history and the interpretation of artifacts—how did those Algonquin speakers get to the Pacific coast?
We mostly neglect these stories and tell stories of the coming of Europeans to the Americas. These are stories of “discovery” and competing European interests in “conquest.” We nod to “religious freedom” as a reason for Europeans leaving old homes, but talk less about weather, famine, small wars, crowding and inheritance, regime changes, and the Prussian draft that all played roles in putting long-time Europeans on small boats in frightful seas for the new world.
Once here, the Europeans began a long, four-century process of displacement of the people who were here before them. In some places it went quickly—people died in huge numbers and tribes disappeared. In North America generally there was a long, slow, slog of displacement, of indigenous people being pushed west and pushed onto reservations, forced to learn English and Anglo culture to survive.
Part of this old story is one of intermarriage, rape, and a mixing of peoples. Warriors and explorers didn’t bring their women along. This struck me first when I was a Peace Corps Volunteer in Eastern Turkey, assigned to a village of “refugee” Turks from Bulgaria and Greece. They had come in Balkan people trades made in the 1930s, between the two world wars. My Turkish friends were Moslem and spoke Turkish, albeit with their own peculiar accent, but they looked more Eastern European than Central Asian. It struck me then that the Ottomans traveled without women—all the way to the gates of Vienna in the 1500s. There had been plenty of time for the mixing of blood.
The Turks in Istanbul and Thrace and the Black Sea were sometimes light and blue-eyed; those south and west looked Mediterranean, and those to the south and east were darker and indistinguishable from Arab neighbors. Even the Romani—the Gypsies—who mostly traveled north and south with their caravans, spoke the languages of their immediate surrounding—along with their own Romani—and shared physical characteristics with their neighbors.
None of this lessens the pain of people fighting to get across borders or to stay in a homeland today. It does say that walls and borders are artificial and always breeched. Physical borders—rivers, oceans, mountain ranges—make crossings and the intermingling of peoples more difficult, but they too give way in time.
Unfortunately, wholesale death seems endemic to these mass movements. But there are minglings of cultures, and kindnesses, too, from the Egyptians who took in the Israelites to the Dutch who hid the Frank family and the Danes who wore Jewish armbands; from the French trappers who married Indians and created a new tribe, the Metis, to Americans who have taken “war brides,” refugees from Germany, Japan, Vietnam, and, one supposes, Iraq and Afghanistan.
Millions of refugees are suffering and dying now, but thousands—maybe millions—are coming to their aid. Along with the horror there will be exchanges of foods, languages, and cultures. More importantly, the people who rise to help are showing one of the oldest and most basic forms of right conduct—putting aside fear and the dark impulses of exclusion and embracing the outsider, the immigrant.
#  #  #