I’ve been wondering where to start in understanding the Bundys and the militia takeover of the Malheur Wildlife Refuge—and I keep getting pushed back in time and place. My journey started with the obvious—the Paiutes, but it didn’t take me long to get to the Pope!

Let me explain: A couple of years ago, a group of us at the Josephy Center spent a few weeks examining the Nez Perce and early white settler history in the Wallowas. 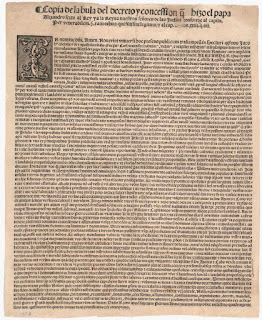 On the day we were talking about the treaties of 1855 and 1863 (the Paiute and US Indian treaties being my initial starting point in my Malheur quest) that led up to the 1877 Nez Perce War, Bobbie Conner, the director of the Tamástslikt Cultural Institute on the nearby Umatilla Reservation, showed up at the Josephy Center. We asked her to join us, and she jumped in immediately with the Doctrine of Discovery: “You can’t understand Indian treaties without understanding the Doctrine of Discovery.”
So we went on to discuss that doctrine, and how it played out in transfer from the Pope to protestant Englishmen and the ideas of Manifest Destiny, western expansion, Indian treaty-making, and the ultimate displacement of American Indians across the continents.
The Gilder Lehrman Institute of American History in New York has an early version of the document—pictured here—and this is what they say about it:
The Papal Bull “Inter Caetera,” issued by Pope Alexander VI on May 4, 1493… stated that any land not inhabited by Christians was available to be “discovered,” claimed, and exploited by Christian rulers and declared that “the Catholic faith and the Christian religion be exalted and be everywhere increased and spread, that the health of souls be cared for and that barbarous nations be overthrown and brought to the faith itself.” This “Doctrine of Discovery” became the basis of all European claims in the Americas as well as the foundation for the United States’ western expansion. In the US Supreme Court in the 1823 case Johnson v. McIntosh, Chief Justice John Marshall’s opinion in the unanimous decision held “that the principle of discovery gave European nations an absolute right to New World lands.” In essence, American Indians had only a right of occupancy, which could be abolished.
So the indigenous people who had lived in the Americas for millennia had occupied it, but had no ownership of it. Ownership was reserved for good Christian nations, and, presumably, for their mercantile companies—Hudson’s Bay; Dutch East and West India companies, etc. Modern versions of these 17th century giants might be the Army Corps of Engineers and Exxon Mobil. Or beleaguered western ranchers who maybe trace holdings to the Homestead Act of 1862?
“Occupancy” was another road I tried in my understanding of the Malheur situation. That immediately gets one to “joint occupancy,” which is what we—the Oregon Territory, including the Malheur—lived under from the 1818 treaty that finally resolved territorial questions of the War of 1812, until 1846, when a new treaty setting the boundary line at the 48th parallel forestalled another conflict between Great Britain and the United States.
To summarize: the search for “original” owners of the land that is now the Malheur Wildlife Refuge—who the current hostile occupiers say they are looking for—took me first to the Paiutes. But that didn’t work, because they only lived there, occupied it and did not own it. Which took me to the United States and Great Britain, which, at least initially, only jointly occupied the land but did not own it (along with the Paiutes, who also jointly occupied in fact if not in law).
Actual ownership of the Malheur country begins with the United States and the 1846 treaty, which rests on the 1823 Supreme Court Case, which in turn rests on a 1493 Papal Bull. The land in dispute was not included in the Northern Paiute Reservation, although the Indians are allowed by treaty to have access—occupy—for hunting, fishing, and gathering. It was never, in my brief exploration, homesteaded, so no private rancher has ownership rights based on that.
Which means that the land is “owned” by the US Government by treaty and law going back to the Pope. Which sets up some kind of religious battle between Catholicism and a long-dead Pope and the God who told the Bundys that they should undertake their mission.
If this is all bewildering, Alvin Josephy, who always seems to have something to say about current events involving tribes, says in several places that one of the initial mis-understandings between Europeans and indigenous Americans was the concept of private land ownership. He thought, correctly it seems, that that misunderstanding still prevails.
# #  #