Alvin Josephy told me once that liberals just didn’t get it with Indians.  In the sixties, after legislative victories on voting and discrimination issues, some liberals, according to Alvin, were ready to “move on to Indians.” But when they took their good intentions into Indian country, they were told that Indians weren’t so concerned with Civil Rights; Indians were interested in Treaty Rights.

I think the story tells us something about the confusing and sporadic nature of liberal support for Indian issues. We don’t really get this stuff about treaties. Look at Standing Rock, which was a great liberal rallying cry only months ago, but is now on the back burner again—do you remember seeing anything recently in the New York Times or other bastions of the liberal establishment press about the situation in the Dakotas? Indians are still there. The pipeline is under the river, and there are, I believe, cases pending. But a quick Google search of Standing Rock updates brings up stories from February and April. Standing Rock is about treaty rights and their long and continuing abrogation and dismissal by the establishment. Too confusing for liberals looking for simple wrongs to right.

Standing Rock is also, of course, about what we humans are doing to the environment. But Indians reminding us of environmental disasters is also confusing and sometimes uneasy. So once again liberals pick up on it for a while before moving on to “cap and trade” or plastics at McDonalds or another middle class crusade that hits us in the places we live, work, and send our kids to school or offers to save the planet.

Water and oil in South Dakota or the extraction of oil from Canadian tar pits—which the Nez Perce in Idaho protested by blocking the Lolo Highway when they tried to move huge equipment necessary for tar sands oil extraction to Canada—is not so close, and not as big a planet-wide deal as the Paris Accords or Al Gore. We liberals want to save the school our children go to or save the planet. And we’ll do it with a quick protest or a tax-deductible check. 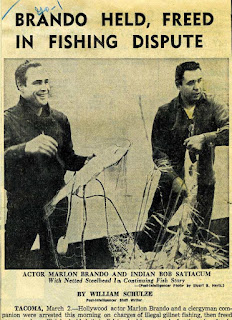 Many liberals applaud Indians for salmon recovery and stands against dams—which seems to me a nice confluence of interests, rather than true listening to all that Indians have to say about fish, health, and the environment. Yes, white liberals, including actor Marlon Brando, appeared in the Northwest Fish Wars that led to the Boldt Decision, but how many of us know what that decision was or does now? And how many proponents of dam removal know about “first foods,” know about the complicated ecosystems around any moving body of water? Why are the Nez Perce interested now in lamprey recovery? Do we even know where that fits in the scheme of river health? Maybe not exactly, said a biologist I know, but the Nez Perce know it was part of what was once a huge river of life for millennia. The elders thought lamprey important, so we’ll bring them back—eventually.

From President Jackson forward, treaties have been ignored or abrogated as often as not—but they, like the Indians, are still with us.