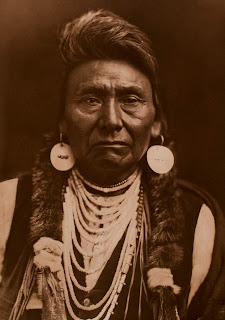 In-mut-too-yah-lat-lat—Chief Joseph of the Nez Perce to the world, wondered about the white man’s religion. Henry Spalding, the Presbyterian, had baptized his father, Tuekakas, and given him the name Joseph, and on his father’s death he had taken leadership of the band of Nez Perce—Nimiipuu—who called the Wallowa Country home, and he had taken his father’s name. At least that is the name the whites called him. What he wondered about was a religion at odds with itself—Presbyterians and Catholics had fought bitterly over theology and converts in his Country from their arrival in the 1830s.

In-mut-too-yah-lat-lat saw and understood many things that whites gave him little credit for; they always managed some workaround of the Indian’s intelligence and logic in pursuit of their own agendas.

At the Josephy Library we give copies of the famous Chief’s speech at Lincoln Hall in Washington D.C., delivered in 1879, just two years after the sad conclusion of the Nez Perce War in Bears Paw, Montana. People sometimes cry when they read it. I think it is a good starting point for understanding a people and history that live with us still—an invitation for scholarship and friendship.

I am privileged to know Nez Perce people and to be learning some of the Nez Perce story. I say some, because a lifetime would be not enough to learn a story of thousands of years, and because my learning would always—will always—be through my own white eyes.

Nevertheless, I get glimpses—in stories from elders, in the way things happen here at the Nez Perce Homeland in Wallowa and at the Josephy Center when Indian people are involved. We’re privileged too to have some written history—oral stories Indians have passed down that have been transcribed; the written accounts of traders and even missionaries; and in my case especially the work of Alvin Josephy.

Alvin waited to reconstruct the story for the white world until he “found” Yellow Wolf and Hear Me My Chiefs, books that are Indian accounts taken down by an eccentric white rancher named Lucullus McWhorter. McWhorter was a friend to Indians who met Yellow Wolf and the Nez Perce as they worked in the Washington hop harvest. Yellow Wolf was a War survivor. McWhorter traveled the route of the famous War Retreat towards Canada with Yellow Wolf, and the books were published by a little known Idaho company named Caxton.

Josephy also scoured missionary and fur trade accounts, and he was just in time to meet and sweat with the last survivors of the War of 1877. His work—The Nez Perce Indians and the Opening of the Northwest, is important in learning the story, but there is no better way to emotionally understand it than to read In-mut-too-yah-lat-lat’s words. And there is no better time to hear them than at the primary Christian holiday:

Whenever the white man treats the Indian as they treat each other, then we will have no more wars. We shall all be alike – brothers of one father and one mother, with one sky above us and one country around us, and one government for all. Then the Great Spirit Chief who rules above will smile upon this land, and send rain to wash out the bloody spots made by brothers’ hands from the face of the earth. For this time the Indian race are waiting and praying. I hope that no more groans of wounded men and women will ever go to the ear of the Great Spirit Chief above, and that all people may be one people.

In-mut-too-yah-lat-lat has spoken for his people.