In the news this week: the story of on an archeological dig on the Salmon River at Cooper’s Ferry. It’s an ancient village site the Nez Perce call  Nipe’che. The dig leader is Dr. Loren Davis of Oregon State University, with staff from the University and scientists from the UK, Canada, and Japan. It’s been going on for some years, with carbon dated artifacts from a first site in hand and work on a second nearby site in progress. 16,000 years is the reason it made headlines this week—well, headlines in some places. In a gushy blog post, Craig Medred writes that:

“Archeologists in Idaho appear to have put another nail in the coffin of the long-held but rapidly dying theory that the first humans to arrive in North America crossed the Bering Land Bridge connecting Asia and Alaska and kept hiking south.”

He goes on: “Scientists working the Cooper’s Landing archeological site on Friday published a paper in Science reporting they had radiocarbon-dated projectile points there to sometime between 16,560 and 15,280 years before present.” And he notes that the projectile points found at Cooper’s Landing, or Cooper’s Ferry, match those of sites in Japan from the same era. (https://craigmedred.news/2019/09/01/the-paddlers/ for the full article)

*  *  *
I’ve often wondered why the academy has stubbornly held onto the view that the original human inhabitants of the “new world” arrived over a land bridge from Asia. Common sense and the historical record about the way people move tell us that for much of human history travel by water was easier than travel by land. 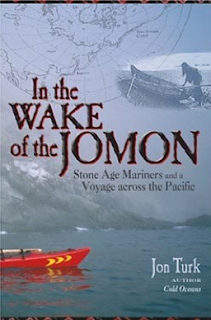 In 2000, when I was still the director at Fishtrap, we decided to do a winter conference on “Living and Writing on the Edge.” We looked for writers who were adventurers by inclination or chance, and spent a winter weekend at Wallowa Lake in conversation with them.

I don’t know how we found Jon Turk, but he was the real deal, an over-educated scientist who had grown disenchanted with his life and work, and so dropped his job and headed off in a sea kayak to paddle and sail around South America. It didn’t work out, but he was undaunted, and the journeys continued until he had grist for a book, Cold Oceans: Adventures in Kayak, Rowboat, and Dogsled.

Jon Turk got in touch with us later as he traveled with a new book—In the Wake of the Jomon: Stone Age Mariners and a Voyage Across the Pacific. In 1999 and 2000, he and some partners had sailed a small trimaran and paddled a sea kayak from Japan to Alaska–not in one swoop, but over time, as it might have occurred thousands of years ago. The book tells the story of the modern expedition, looks back at Stone Age mariners who paddled these waters over 10,000 years ago, and asks “Why did people with primitive stone tools leave their homes in the lush temperate bamboo forests, with salmon in the rivers and deer in the forests to paddle into the frozen Arctic during the Ice Age?”

Turk’s was an anthropological quest into Stone Age migration, skeletal remains, archaeological mysteries, and the eternal urge to explore—what he told us was a kind of “wild gene” that has sent humans crashing around the world forever.

Here’s Turk today on his Jomon book: “Since the book was published, anthropological studies have gone back and forth, supporting my claim, refuting it, and now returning to some level of support.  That’s science…  If you read the book to explore the question, ‘How did people cross harsh lands to enter into the unknown, and Why?’… the message remains valid and timeless.”

And today, in Idaho, with those newly dated stone fragments matching others from Japan—land of the Jomon—I wonder whether the archeologists from three continents are reading Jon Turk, who showed how it could have happened.