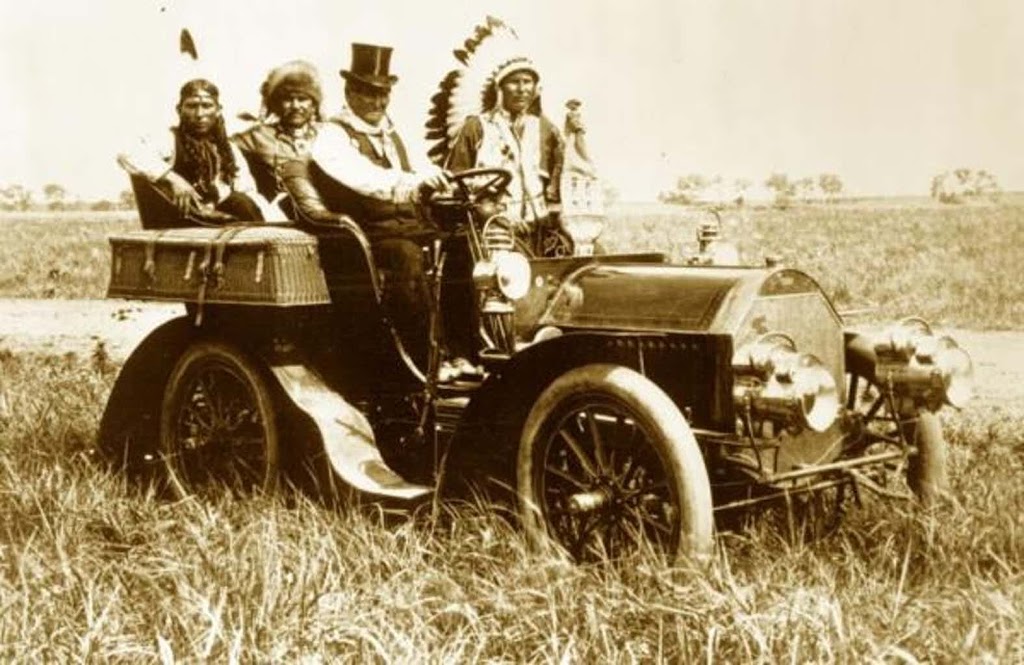 I’ve just finished reading Philip Deloria’s Indians in Unexpected Places, an encyclopedic look at Indians and sports, technology, music, and the movies in the early years of the twentieth century. It was a time, Deloria says, of “paradox and opportunity,” when Indians were at a low point in numbers and economics, due to long history and the late nineteenth century cascade of legislation aimed at Assimilation. The end of Indian Wars—Custer, the Nez Perce and Modoc wars, the 1890 Massacre of the Lakota at Wounded Knee ushered in an era of final “pacification” and assimilation. The Dawes Allotment Act of 1887 reduced Tribal lands by half; in the 1880s and 90s boarding schools and laws and codes aimed at eliminating languages and cultures ate away at tribal traditions and strengths.

The new century brought huge changes to all America, and Deloria argues that Indians were important—sometimes at the center of those changes. There is the famous picture of Geronimo in a Cadillac, and stories of oil-rich Osages buying new cars. The book is rich with photos, one of an Indian atop the hood of a Pontiac—a car that always had a richly Indian hood ornament. Pictures too of Indian women with Singer sewing machines, and one of a traditionally garbed woman under a hair dryer.

Why shouldn’t Indians embrace the new automobility, as they had the horse—easier to travel long distances on land-large reservations. The relation of Indians and automobiles goes all the way to Jeep Cherokees and Dodge Dakotas today, and those early days of the automobile remind us of Indians used as positive images of strength, naturalness, and the great outdoors. Advertisers—of cars and sewing machines, e.g., also liked the incongruity of modern and primitive, the humor that might catch a white eye.

In Deloria’s analysis, this “primitivism”—the thirst for natural, strong, and somehow “native”—carries from Buffalo Bill’s Wild West Show through the early silent movies, turn of century classical music, and early college and professional athletics. Jim Thorpe was the iconic Indian athlete, and a few of us who are sports fans and history nuts might know about “Chief” Bender of the Philadelphia Athletics, know that Carlisle Indian School beat Harvard and Army, and that Haskell played a major college football schedule. We didn’t know, but Deloria shows us, how Thorpe and other Indian athletes—including his own grandfather, Vine Deloria, Sr., the “greatest athlete” ever at St. Stephens College (later Bard)—were racially typecast as natural athletes with sharp reflexes. They were admired for their natural primitive strength and grace in an age that was going modern.

I’ve known about Buffalo Bill forever, and more recently learned that there were other touring Indian shows; Lucullus McWhorter arranged for his Nez Perce and Yakima friends to perform at fairs and rodeos across the inner Northwest. Deloria shows how Indians, some of whom had traveled England Europe extensively, were often more sophisticated than their American Audiences. They lived at the border of their mounted, sometimes-warring past and the new age of automobiles and movies. In fact, Bill Cody made a movie reenactment of Wounded Knee in 1914, and their were scores of Indian actors in New York and then Hollywood, as the movie industry moved West. And there were other honest attempts to portray Indians truthfully, even to explore Indian-white friendship and romantic relationships. Indians acted, wrote, and directed for early one-reel and two-reel silents.

And the music played for those silent movies might have come from a classical-popular mix of Indian sounds and rhythm being captured by turn of the century ethnographers and composers. Dvorak’s “New World Symphony” made that attempt, but there were less well-known American composers and Indian singers of the day who moved from classical opera to touring music shows in Indian regalia with some of the transposed Indian sounds.

A World War, the 1918 Influenza (which Deloria does not explore, but which undoubtedly had a great impact on Tribal peoples who still remembered in family history and lore the diseases of the 1700s and early 1800s which had decimated them), and codification and consolidation of college and professional athletics, the movie industry, and technology all served to edge Indians out of the mainstream—“modernist”—movements, and back to reservations and fights for self-rule, for sovereignty. They’d made their pitch, been ridiculed and feted, but the sweet spot of full participation in a broad American movement towards a shared future faded.

African-Americans, denied the opportunities accorded Indians for that time, were engaged in the struggle to be integrated into America on an equal footing. They had no home ground to retreat to, no indigenous language to find comfort in, and no treaties guaranteeing them land or anything else. Women too found themselves left out of the political and economic mainstream, and like African-Americans, began their own march towards equality.

Deloria’s book opens so much ground, including the opportunity to explore and contrast Black, Immigrant, and Women’s assaults on early founding principles and documents describing a new country designed by and for White, Anglo-American men. Importantly, it catches a moment when real pluralism—the use and celebration of all the people of these United States—drew American Indians into the American journey. It also shows the momentary, 30 year, weakness—resurgent racism, and lack of real economic power—that passed Indians by.

And maybe, by moving then to the fight for land and sovereignty, it points to a time when Indian values of resilience and sustainability might be the most important things twenty-first century Americans can hang onto.