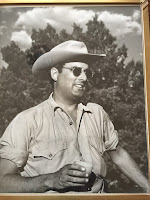 Well, it’s kind of my horn, but mostly my friend and mentor, Alvin’s horn. And mutual friend and co-editor Marc Jaffe’s horn. And editor (Alvin’s own long-time editor) Ann Close’s horn. She steered us through the project, and then passed it on to Keith Goldsmith at Viking Penguin. So a chorus of horns—maybe a band!

The book is The Longest Trail: Writings on American Indian History, Culture, and Politics, by Alvin M. Josephy, Jr., edited by Jaffe and Wandschneider. It’s in three sections, based on three concepts that Alvin drummed into us over years: First, that the standard narrative of American history has omitted Indians—they have either been sideshows or impediments to the march of Euro-American civilization, not treated as actors in the American drama, the actions, decisions, and accidents that have all gone to make us the nation we are.

Second, Indians have something to teach us still about living with the rest of creation. There were democrats Read The Article