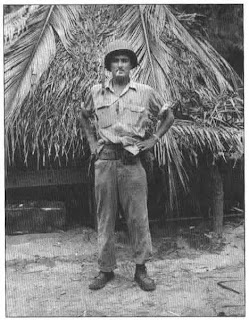 Being a direct participant in World War II was a choice for Alvin Josephy—but not much of one. Born in 1915, he came of age in the depths of the Depression as fascist regimes were gaining power in Europe. He’d been involved with student groups and national politics—meetings and debates on Huey Long, socialism, communism, and the New Deal—while at Harvard, traveled to Mexico to interview Trotsky and President Cardenas in 1937, and was working as news director at WOR Radio in New York on the eve of Pearl Harbor.

Soon after Pearl Harbor Alvin headed to Washington D.C. and Archibald MacLeish’s Office of Facts and Figures—the government propaganda arm. It wasn’t close enough, and connections, contacts, and events soon had him at Perris Island Boot Camp, and then a Marine Corps combat correspondent in the Guadalcanal mop-up, and at the landings and occupations of Guam and Iwo Jima.

He waded ashore at Guam, talking into a