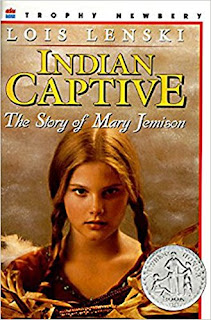 Mary Jemison was captured by Seneca Indians in 1758. Her parents and most of her siblings were killed, and for some time she tried to resist her captors and find a way back to place and family. But, eventually, she stayed, stayed to marry two Indian men, to have Indian children, and, living with Indians as an Indian in her 80s, to give an interview about her life to a white doctor named James Everett Seaver. Her “memoir,” first published in 1824, had been published in at least 30 editions by the time the author of the book I read, Lois Lenski, published her fictionalized account of Mary Jameson’s life in 1941.

Indian Captive: The Story of Mary Jemison, won the Newberry Award for children’s literature in 1942. I read the Harper Trophy edition, first published in 1995—my copy is the 17th printing! I imagine it is still in print.

Indian Captive. Parents and siblings murdered by the Indians. Children’s Read The Article