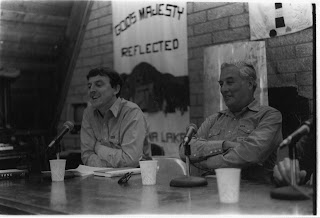 Alvin Josephy died in 2005. I read something that he wrote—or that was written to or about him—almost every day. And I am continually amazed by what he said and when and where he said it.
In Life Magazine in 1971, Josephy wrote that the US government interpreters were telling visitors at the Custer Battlefield that Custer was a hero and the Indians were savages; in the New York Times Sunday Magazine in 1973, just weeks after the FBI-Indian confrontation at Wounded Knee, he said that the Indians were justified, and published photos of Custer’s troops being buried with high ceremony and Sioux Indian survivors of the battle being slaughtered and buried in a mass grave. In 1992 he reminded—in speeches and a book, America in 1492—that Columbus came to a land of some 75 or 90 million people, over 2000 mutually unintelligible languages, and cities larger than any in Europe at the time. And that the learned clerics
Read The Article