February 19 marked the 75th anniversary of President Franklin D. Roosevelt’s Executive Order 9066, authorizing the removal of any or all people from military areas “as deemed necessary or desirable.” The military then defined the entire West Coast, home to the majority of Americans of Japanese ancestry or citizenship, as a military area. And although race or ethnicity were not mentioned in the order, the Japanese-Americans on the West Coast—citizens or no—were targeted for removal.

In the middle of a “just war” against Fascism and Imperial Japanese expansion over peoples across the Pacific, Gwen Coffin, the editor of the Wallowa County Chieftain, rose to challenge President Roosevelt and Executive Order 9066. From his far outpost in Wallowa County he spoke to remind people of who we are and why we were fighting. It was a brave thing to do. I remember him saying once, with a chuckle, that the barber would not cut Read The Article 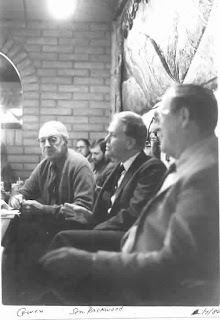 Gwen Coffin grew up poor in Colorado, made his way through college and law school in Chicago, married a teacher named Gladys, and, in 1941, moved to Wallowa County to buy a newspaper and practice law. He never got around to the law practice, though he did make some law while serving briefly in the Oregon Legislature. He was still going newspaper strong at the Wallowa County Chieftain when I got here in 1971, taking on Johnson and Nixon and the Vietnam War, promoting conservation and wilderness.

Oh—and Gwen was the man Alvin Josephy called, and the Coffin House in Enterprise was the house that Alvin came to on his first trip to see Joseph’s Nez Perce homeland. They ate lunch and Gwen gave Alvin his first tour of Wallowa County. That would have been mid-1950s, shortly after Alvin came upon the Nez Perce story that changed his life–and in turn has changed many others.

Fishtrap lives in the house Read The Article