Dear Friends of the Josephy Library,

Welcome to the first Library Blog! Actually, I am sending the text in a regular email, as I have been doing for the past year or so, but it will now be posted on the the Josephy Library blog, where you are now!

This is all new ground for me, so patience please—and I will appreciate your suggestions. 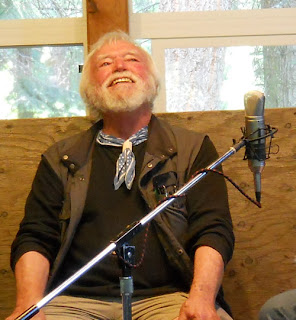 Jack Loeffler celebrated his 74th birthday in a hotel room in Baker City on his way to Fishtrap this July. He’d been as far as Joseph before, sat on Alvin Josephy’s deck and interviewed him, but he had never made it as far as Wallowa Lake. He was thrilled with the first sight of it..

On Monday morning we began a conversation that seemed like it had started ages ago, and the time between the phantom conversations of the past and today melted away. From time to time Jack would say that he needed to interview himself about Josephy, and I would think that I should have a damned recorder going while we talked.

Neither happened, but I’m hoping they will.

Jack brought us a disc with a couple of hours of interview time with Alvin, and he brought stories: the time he read Alvin’s testimony defending the Hopis in a fight with Peabody Coal; the camping trip with Alvin sleeping under the pickup until a thunderstorm woke him thumping into the bottom of the pickup bed and scrambling inside. And on and on…

At Fishtrap, in a brief afternoon session, Loeffler played short snippets of interviews—most done for radio programs in New Mexico—on environmental issues with Stewart Udall, author John Nichols, Earth Firster Dave Forman, Sierra and Friends of the Earth’s David Brower, Ed Abbey, Alvin Josephy, and a host of others. There was no name dropping—just 20 second blurbs from here and there to make a point..

Later, I asked him about the Abbey and Josephy exchange about grazing on public lands.. Abbey was of course dead set against grazing; Alvin, informed by friendships and hours on horseback with Wallowa County ranchers like Jack McClaran and Biden Tippett, took a different point of view. Developers were the real problem; ranchers and environmental thinkers should be in league.

It was a friendly dialog, according to Jack. His eyes sparkled with the thought of his old friends, Ed Abbey and Alvin Josephy, in a long-ago conversation that could still stir emotions today. I’ll have to send you that picture of Ed and Alvin on the rim of the Grand Canyon.” But he didn’t need to—it’s in his memoir about Abbey, Adventures with Ed. Clean shaven Alvin between bearded Ed and long-haired Jack, with a small group of anthropologists and photographers all looking very much 1971. I’m sure Alvin had to catch a plane soon to an editorial board meeting at American Heritage or a session with some Indian tribe or government committee redesigning the BIA. 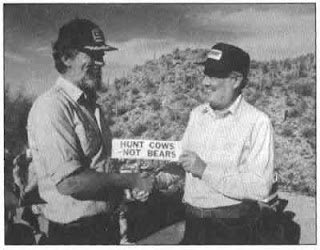 But he looks happy and not completely out of place with this band of 1970s renegade thinkers in the thin Southwest air.

p.s. I found another picture of Ed and Alvin—In Alvin’s memoir! And I am posting it here.