The name—its explanation comes on the first pages of the book—pulls you into the story. The writing is measured and strong and beautiful—

“The Old Ones say that our long straight hair comes from the waving grasses that thatch the edges of bays. Our feet and hands are broad and flat and strong, like the paws of a bear… Our talk rolls and tumbles like the rivers that served as our roads.”  It keeps you going.

But it’s a rough road. Richard Wagamese, a Canadian Ojibwa writer well known in his own country but not much here, tells a brutal story of old wisdom, a vicious boarding school, the grace and beauty in sport, and the depth of irrational racial hatred.

I’ve said before that slavery is not the original sin; the racism that produced and supported slavery is the country’s original sin. And here I include our neighbors to the north, who were part of, and are today, like Read The Article

In a talk at the Josephy Center on Saturday night, Nez Perce elder Allen Pinkham Sr. said that non-Indians have never understood that Indians, even while succumbing to Euro-American diseases, arms, numbers, and policies aimed at their cultural destruction, continually borrowed from and adapted to European science and culture. His examples included learning to use horses, cattle, guns, iron, and words on paper.

He had a different take on missionary zeal and the supposed longing for “The Book” that is cited in most histories of Indian-white relations in the West. Indians were sent to Hudson Bay’s school in Red River, Canada, and a group of four was sent to St. Lewis to find William Clark in search of information about writing and books, not “The Book.” But Europeans interpreted all as a thirst for knowledge of their—Christian—religion. What we wanted, Allen’s father had told him, were the “tools,” the way to Read The Article 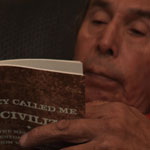 I watched a film on PBS last night, “The Thick Dark Fog.” It is the story of a Lakota man named Walter Littlemoon and his struggle to reclaim his humanity, stolen from him at a boarding school as a five year old on the Pine Ridge Reservation. The man’s a poet—a simple and eloquent speaker, and I will now order his book, They Called Me Uncivilized.
And while I wait for the book, I will puzzle over two things. First, as we recovered from the horror of the Holocaust in Europe and watched another again with a sideways glance at Cambodia, cultural genocide was going on under our noses in our own country. Oh, by the mid-sixties, as I came of age, we were probably no longer kidnapping Indian children, cutting their hair, and beating the Indian out of them so that we could make them men and women, but the
Read The Article