Like many Americans—and people across the world—I have watched and listened to the new Pope with hope and wonder. A man of clerical power that extends over much of the world with Francis’s humility giving voice to the poor, the immigrant, the prisoner, is something new in our time, and something that is reaching beyond Catholics and even Christians. I chuckle when he rides in a Fiat, cheer when he derides consumption, and give thanks when he talks sensibly about climate.

But the canonization of Father Junipero Serra?
My friend Ray Cook grew up in Idaho, lived most of his life in California and worked for the State Highway Department. On retirement, Ray started coming to the Wallowas, where his grandfather had been a Methodist preacher and his grandmother was buried (Ray placed a tombstone for her in the Wallowa cemetery).
Ray once had to evict an elderly Indian lady to make way for a California highway, and the act has haunted him ever since. He came to Fishtrap events for several years, and over time has sent me letters he writes to newspapers and notes of events that he attends—most having to do with American Indians. Many of these things are colored by that experience, some by later stories he has read and heard. 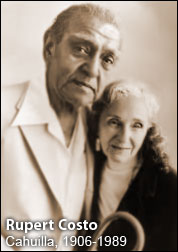 One of the storytellers was a friend he gained at the Highway Department, an engineer named Rupert Costo. Costo was a Cahuilla Indian, a writer, publisher, and advocate for Indians. Ray sent me his autographed copy of a book Costo edited and published, The Missions of California: A Legacy of Genocide, for the Josephy Library. In it modern scholars write about California Indians and the brutal Mission legacy, and detailed and heart-wrenching Indian testimony that has been taken over the years is reprinted. The book, published in 1987, was an attempt to halt the canonization process of Father Serra.
Costo died in 1989, so he did not live to see Pope Francis’s embrace of Serra. He did live long enough to donate the extensive collection of books and artifacts relating to American Indians that he and his wife, Jeanette, who was Cherokee, had accumulated, to the University of California, Riverside, my alma mater!
And to donate $400,000 to the university to endow a chair in Indian Studies—a position now held by my friend, Clifford Trafzer! In fact, as I reached back for facts in this case, I find out that Costo, who was born in Hemet California, was an instrumental lobbyist for having a UC campus at Riverside. (I don’t remember hearing that story while I was a student there.)
We should, it is argued, not judge Father Serra—or the many priests, Spanish land grantees, and later American miners and farmers who enslaved, tortured, and sometimes sought to eliminate Indians—by the standards of today. So we should condone the throwing of babies into cactus patches to get parents to tell the whereabouts of runaway slaves, threatening and throwing babies off the “Crying Rock” to make Indians work, and collaring Indians to pull plows all as practices of their times?
What about the priests and lay people who did speak up? Alvin Josephy notes, in 500 Nations, a friar who spoke out against the brutal treatment of the Indians in 1799. He was declared insane and taken out of the country. If we canonize the brutalizers, what do we do with those who acted saintly in their times?
Alvin argued that “the treatment of California Indians was as close to genocide as any tribal people had faced, or would face, on the North American continent.” I can’t put my hands on it now, but I believe Alvin knew Costo and his work, and I believe that he, like Costo, would now stand up against this new Pope on the canonization of Serra.
We admire Pope Francis exactly because he argues against many of the popular and expressed values of our times—unbridled capitalism and conspicuous consumption for example. If Costo’s book and Josephy’s work had found their ways into the Pope’s life, I have to believe that there would be a different story in the news today. Maybe we would learn the friar’s name, and maybe HE would be sainted and Serra relegated to the history books as a man of his times.
# # #