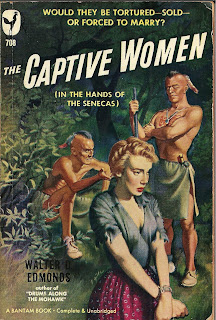 Alvin Josephy wrote and spoke frequently about the Indian story being left out of the standard American history of school textbooks and the academy. He said that amateur historians–“history buffs”–and novelists kept the story of Indians and the West alive when academia didn’t much care.

I teach a class in La Grande on Northwest Tribes and the Ecosystem they lived in, and how European intrusions, from diseases, horses, fur-trapping, and treaty-making to boarding schools, dam-building, and fire suppression changed Indians and the land. I’ve become increasingly interested in white-Indian realtionships, and yesterday we compared white male—women; white male—African-American; and white male—Indian power struggles from colonization forward, looking particularly at the rise of Black Power, Red Power, and Feminism in the 60s and 70s.

Two things stood out. First, white men, empowered by physical strength, religion, and tradition, were able to dominate women in the United States from our beginnings, and the appreciation of women as human beings deserving of the recognition and opportunities accorded their fathers and brothers has come about very gradually, and often painfully.

Second, African-Americans were brought to the new world as slaves, smothered first with physical force to get them onto ships and then shipped to a completely alien world, where fellow slaves often did not share language or culture, and a white minority was able, with the slaves’ debasement and confusion and their own assumptions of superiority and use of force, to dominate them. Their recognition as human beings deserving of the opportunities accorded their white brothers and sisters has also been painful and slow.

Josephy says that Europeans gave the Indians three choices: Assimilation; Removal; and extermination. There have been killing sprees and even genocidal actions against Indians, but Indians did not all die.  Removal has stumbled on inconsistencies and out and out failures, from Jackson’s removal policy to the widespread introduction of Indian “reservations.” Indians are still here—on and off their reservations.

Assimilation has always been the preferred government and societal treatment of Indians. Indians have been missionized, allotted onto farms, barred from practicing religion and cultural events, kidnapped and stripped of hair, language and culture at boarding schools, terminated from their reservations, and relocated to urban centers, all in the cause of making them white.

Indians, it seems to me, had and have two things that European women and African-American men and women did not have when confronting white European men. First and most importantly, Indians had the land—and all that that meant. They knew the land, how to use, travel, and live on it. Europeans needed Indians at every point along the colonization road to show them those things.  But White Europeans wanted that land for their own purposes, and used every means of getting it—war and treaty being the primary means. Because the Indians had the land originally, they had a power in war and negotiations that neither women nor African-American slaves had. In the time, they were often overwhelmed with force and deception, but they hung and hold on—now to small bits of land and culture that take them back millennially.

The other thing that Indians had from the beginning was a physical health and lifestyle that was attractive to some of the European intruders. Think of Rousseau and his noble savage, and of Daniel Boone, the fur trappers and mountain men who left polite society to live with and like the Indians. They get their due in university press and small local publishers, not in our textbooks

And the story of women and children captured by Indians is threaded throughout our literary history in adventure books for children and in the diaries and narratives of “amateur” historians.  Not, again, in the textbooks, where the stories of grim preachers, prim women, and Salem witches do find room. But the “captives,” including the many who refused to return to “polite” society, have their own literature, from Mary Jemison, captured in 1753 at 15, diarist and subject of a stream of books from then to now, to Paulette Jiles’ just-published News of the World, a fictional account of a white girl raised by the Kiowa.

With Indians, white-guilt, Indian resilience, romanticism and a lingering taste for the land and the wild have crowded and continue to crowd each other in an ambivalent  500-year stew of a relationship. A stew too complicated for textbooks, left to novelists and history buffs.