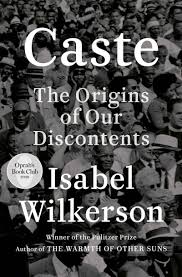 I’m half-way through Isabel Wilkerson’s Caste: The Origins of Our Discontents, and while the writing is superb, and the argument that Caste is a more accurate description and useful tool than Race is in assessing American history, I am once again disappointed in a major historical text that does not directly address Indians in America.

Although I’ve not read the last half of the book, I did use the index to look forward for mention of indigenous Americans. There is little mention; the author’s stance on the subject best stated in this early entry:

“The colonists had been unable to enslave the native population on its own turf and believed themselves to have solved the labor problem with the Africans they had imported. With little further use for the original inhabitants, the colonists began to exile them from their ancestral lands and the emerging caste system.” (p. 44)

From the history texts I have read, that is a true statement regarding failure to make slaves—or even indentured servants—out of Indians, and it is also true that “colonists began to exile them from their ancestral lands.”

The last bit, about exiling Indians from the “emerging caste system,” also makes sense. What does not make sense is that there is no effort to describe what does happen with Native Americans—Indians—in relation to Whites and Blacks in the emerging segregated nation.

Indians are different: they were here first, and occupied the lands the colonists wanted; they knew things about plants and land that colonists needed to know; they were sometimes revered for their physical health, or their native simplicity; they had tribal organizations, languages, and cultures that were havens.

As Wilkerson observes, they did not fit neatly into the two-tiered caste system that the colonists were developing, so they were “exiled… from… the emerging caste system.”

As I’ve pointed out in previous posts, major mainstream historians Jill Lepore and David McCullough continue to dodge the subject of Indian-White relations and their impact on American history as they celebrate the overthrow of slavery. Ibram X. Kendi’s brilliant history of the development of white supremacy and racism as a necessary precursor to the institution of slavery makes some mention but gives no systematic treatment of the Indians who have dodged—or been dodged—in and out of racist thought over centuries.

For most of the last 400 years, Indians have been bit players in the American drama as it is retold, and real history of Indians has been largely orphaned, or siloed. Decades ago, Indians were the subjects of a dominant and superior civilization that was marching across a continent, “civilizing” Indians and making former Indian lands “productive.” Then they were caricatures in Buffalo Bill Cody’s Wild West Shows, and caricatures in movie stories of the conquering and (white) settlement of the West. When Alvin Josephy published The Indian Heritage of America in 1968, a book reviewer claimed that there was more information on Indians in that one book than on the shelves of most libraries in the United States.

Dee Brown’s Bury My Heart at Wounded Knee was published a few years later, coinciding with the Civil Rights movement, and since then many Indian writers have stepped up with histories—and often fact-based fiction—to tell Indian stories. David Treuer and Louise Erdrich follow on the work of Scott Momaday, Leslie Marmon Silko, and Vine Deloria, Jr., and now Vine’s son, Philip Deloria is the first Indian on the history faculty at Harvard.

Although the real stories and histories are told more frequently, they seem somehow isolated, in a kind of silo that keeps them separate from the mainstream of White history as well as the new histories of White-Black relations explored so effectively by Kendi, Wilkerson, and others.

Here’s a simple thought that stands on two legs. The first is land: the land was Indian land before it was White, and although Indians have been shoved off land, driven to other land in Indian Territory, pushed together with other tribes onto smaller and smaller reservation lands, many tribes and Indian people still live with ancient lands that sustain them. Land is, for many Indians even today, not property, not a commodity to be bought and sold, but the tie to customs, languages, and generations of forbears. And those lands vary from the frozen North to the desert Southwest, from Black Hills to the coastal Pacific.

Secondly, although many Indian languages have been lost, and food sources and economic patterns been disrupted, there are still over 200 Indian language spoken in the United States, and efforts to retain language—and land too—have never been totally lost, and are in fact thriving today.

Africans from many tribes and languages were brutally brought to America, stripped of culture and language, made to speak English even to each other, and mixed into one racial/caste pot called Black. Out of the horrors of caste/racial segregation, Blacks have been able to build culture. They built the Harlem Renaissance and they’ve pioneered jazz, R and B, and hip hop, and made basketball their own game. There’s a story line that Kendi and Wilkerson and others can trace in a single volume.

Over the same course of time, Indians, in their relations to the colonists, fought and retreated, were defeated but survived, not as “all-Indian,” but as one tribe here or a few tribes there. There were designs on “solving” the Indian problem by killing them all or by assimilating them all. Advocates of both approaches warred among themselves and with the Indians and their good white friends. And Indians have been able to retreat to land and language—hundreds of languages and hundreds of small plots of ancient lands—through it all. There’s not one story line, but thousands of novels and poems celebrating a richness and diversity that has never been totally homogenized into “Indian.”