The name came to Edward S. Curtis from Indians, who were the subject of his life work—a twenty volume study in words and pictures of The North American Indian. The title of Tim Egan’s fascinating new biography is Short Nights of the Shadow Catcher: the Epic Life and Immortal Photographs of Edward Curtis. 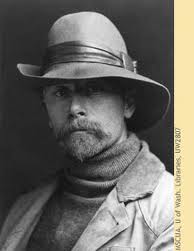 It must have been easier for the ones with firm beliefs and intentions, the purists: the original Europeans who thought the indigenous peoples on the new continents were less than human and best used as slaves, and, if worked to death or killed, of no moral consequence; the northern Europeans who started on the Atlantic seaboard and drove Indians west with diseases and superior weapons, duplicity, and sometimes savagery; and those on all fronts who thought and said that the best Indians were dead Indians.  Col. John Milton Chivington, who engineered the Sand Creek Massacre of friendly
Read The Article