I just finished reading Killers of the Flower Moon: The Osage Murders and the Birth of the FBI. I thought first about people I know—people of Osage blood—who are indeed “lucky to be here” in light of what happened in Osage County, Oklahoma in the first decades of the twentieth century. 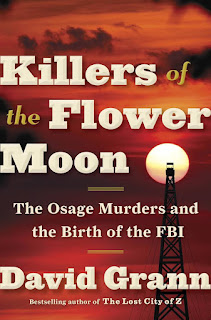 And then “Osage Outrage” came to mind, as what started out as a novel-paced mystery became a litany of lies, deceit, greed, and cold-blooded murder. A novelist would not have left as many dangling unanswered questions, or so many people dead.

Finally, thoughts that could not be as easily captured in a few words came to mind: “It is a question in my mind,” said an Osage Tribal member prior to trial, “whether this jury is considering a murder case or not. The question for them to decide is whether a white man killing an Osage is murder—or merely cruelty to animals.”