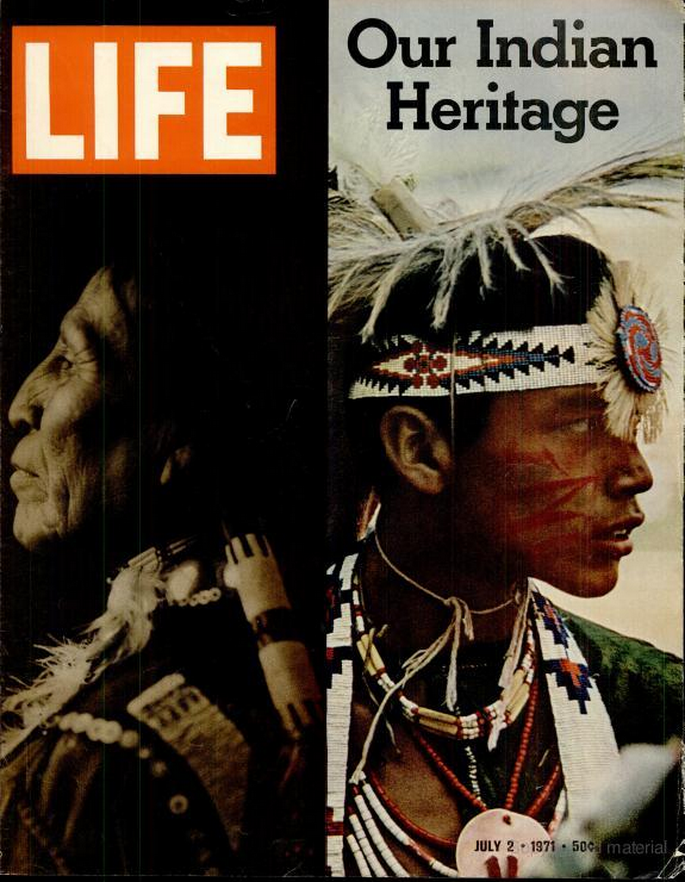 The July 2, 1971 issue of Life Magazine carried a story by Alvin Josephy called “The Custer Myth.”  In the late 1960s, during the filming of “Little Big Man,” for which Alvin was a technical advisor, he took some Indian friends to see the Custer Battlefield, While they looked at exhibits, the government “interpreters” went on about the battle, calling the Indians “savages,” and even intimating that some kind of plot to discredit the American military was sweeping the country (this was during the Vietnam War).
The Indians became increasingly uncomfortable, muttering that “Crazy Horse was no savage, he was a great man.”  Alvin goes on to quote a Nez Perce friend about the importance of Custer to all American Indians:
“The white man’s knowledge of Indians is based on  stereotypes and false, prejudiced history. Custer is the best known hero of that myth to the whites. Therefore, to every Indian in the country, it is the biggest and most important symbol of all the lies that have been told about us. Destroy the Custer myth, the biggest one of all, and you’ll start getting an understanding of everything that happened and an end to the bias against the Indian people.”
Almost as interesting as the story and the point it makes about Custer and Indians is the managing editor’s preface to the entire magazine edition, billed as “The Fourth of July Special: The American Indian.”  It is especially interesting in light of Alvin’s remarks in his memoir about his boss at Time, Henry Luce. Luce, he said, didn’t like Indians, thought they were all “phonies” who should just get on with it and get assimilated!
In his preface to the 1971 issue, Life Managing Editor Ralph Graves says about Luce (interestingly enough, without naming him; and he had passed away a few years prior to this publication):
“One former managing editor of this magazine was a man of legendary likes and dislikes. One of the things he disliked was any story about American Indians, but one of the stories he couldn’t resist was any story about trains. For years his staff wondered what he would do if confronted by a marvelous picture of a railroad locomotive—with an Indian in full headdress seated in the cab. As far as anyone can remember, no one quite dared to offer him this impossible dilemma.”
For those of us looking for progress in Indian-white relations and understanding, I think we can say that the Custer myth—after many long and torturous years—is no longer widely believed by Americans of all colors. And Henry Luce’s great Life Magazine, which alas is no longer with us, was able to portray the people he thought “phony” in their own words and pictures before it bowed off the stage.

And Alvin was there to help.